Upholstering the Infamous Napoleon’s chair. Where do I even start with this one! With Napoleon being such a polarizing figure, I knew I had to go about this carefully. My excitement was overwhelming.  I approached reupholstering the chair as a costly museum piece restoration although it was privately owned and I was on a budget . Little was known about its history, so i had to do a little private investigating on my own to figure out what I had here. I only knew that It was the Emperors chair and nothing else. I found my answer in the painting by Carl Von Steuben titled “napoleons death on the Island of St Helen “1821  To my astonishment there was the chair in the painting to the left of the Emperors bed. Besides the great restoration I did on the chair another important and exciting thing materialized. The question of ” Was Napoleon poisoned by the English while he was imprisoned and does the chair contain evidence of the poisoning “? In other words was I looking at a crime scene when I looked at the painting and if so is evidence contained in the chair ? My careful examination while taking the chair apart only produced a small remnant from the original upholstering, But it was fun looking for signs of poisoning or a note from the killer! One thing for sure this chair was a witness to Napoleons death and probably the only survivor from that Death bed scene!

Let me know what you think! 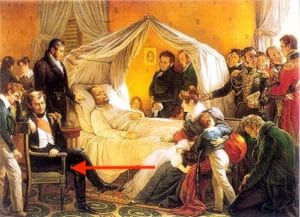 The chair at Napoleon’s death bed 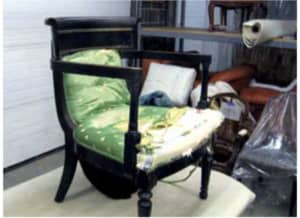