My cameo on Friends! Upholstering the “Friends” Sofa!

I entertained a call here at the shop about a month ago, a very mysterious call about only repairing a popped button. The customer was reluctant to give me any other details, only the address in Boston and instructions on the entrance to the big factory building that I was to arrive at. At first I hesitated for two reasons. For one, I didn’t know where I was going because of the cryptic information about the address. Secondly, it wasn’t going to pay a whole lot of money to go to downtown Boston to repair a single button. However, something told me it could be interesting, so I decided to go down there to see what it was.

I arrived early morning at the address and followed the instructions to an unlocked warehouse, I cautiously opened the door to find large crates and huge dividers. I went in and shouted, “hello?” and a woman responded with, “I’m here!” I very hesitantly walked into what could be described as a maze of dividers towards the woman who answered my call. I was thinking to myself, if needed the only weapons I had on me were my scissors and needles. I shouted agin, “Where are you?” she responded again, “I’m here!” She had a younger, feminine voice so some of the fear had left me at that point.

As I rounded the last corner, what awaited me was the total surprise and probably the most comforting sight an upholsterer could possibly see. It was the sofa from the ever popular Sitcom TV show, Friends, and the young lady sitting on it waiting for me to come repair a popped button. 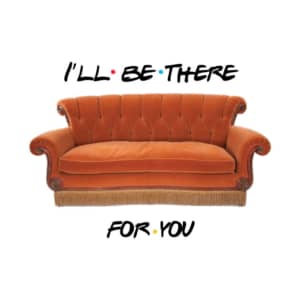